Surfing on a Stand Up Paddleboard SUP Explained 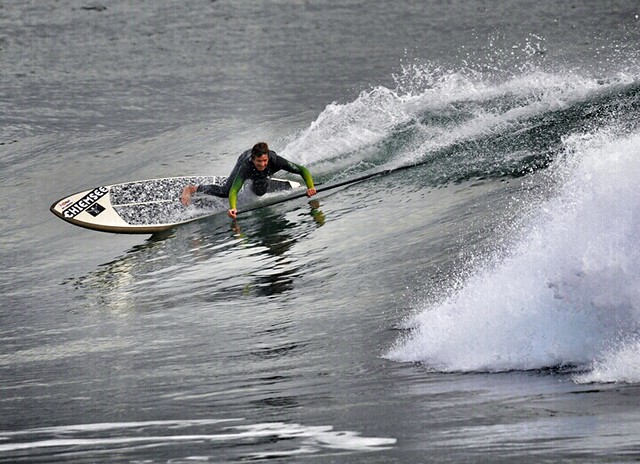 Flatwater is fine for a SUP and it’s still fun to do, but the most exhilarating part of paddle boarding is when you can get out and surf waves on your paddleboard. Surfing is actually where the sport of stand-up paddling started back the day in Hawaii.

You can read more about how SUP was invented here: https://hawaiianpaddlesports.com/news/history-of-stand-up-paddling/

Standing on a large paddle board outside of where the waves are breaking with a paddle simply makes it easier to catch a wave.

But it is not all easy.  A SUP is much larger board than a traditional surfboard, and it takes special skills to learn how to maneuver it on a wave.

Something you want to take into consideration wall out SUP surfing is that you do not have to wear a life jacket. So you need to be extra cautious and safety-minded. Make sure that you are a great swimmer, and never surf alone.

And it is still okay if you choose to wear a life jacket wall stand up paddleboard surfing. That is the smartest move.

Understanding the difference between something like a top turn and a cutback and various other maneuvers will allow you to maximize not only be time but the fun you can have on the wave.

A top turn is pretty much just the opposite of the bottom turn.  You do this maneuver when you are near the crest of the wave to quickly change directions, gain control, and head back down the face of the wave.

When performing a bottom turn, if you don’t cut hard enough you will shoot out on the middle part of the wave and get ahead of where the wave is breaking. When this occurs a surfer can use the cut back turn.

The cutback turn quickly brings the rider back into the meat or the breaking part of the wave. It is also a good way to scrub off speed and slow down your board on the wave, helping to keep the rider in the pocket of the wave.

A surfer can also combine these maneuvers or use them as partial new maneuvers in combination with another turn to create an endless multitude of turns to use while cruising on the wave.

One of the major advantages of SUP surfing, especially for beginners, is that such surfing allows you to ride waves without any previous surfing experience.

What size stand up paddle board should you get for surfing?

A good rule of thumb is to think about a surfboard. Sups are bigger than surfboards, but if you are going to surf on your SUP then you would want to get a sub that is closer in size to a surfboard.

Does this make sense?

You want to pick a SUP that is going to be smaller than one you would use for cruising or touring or fishing. You want to drop one to two feet from the board length that you would use on a flatwater paddle.

For example, if you normally use a 12 to 13 foot stand up paddleboard, choose a 9 to 10-foot board for surfing waves.

Another thing to consider is the width of the board.  SUPs are wider than surfboards. This makes them great for stability and standing, but not so good for turning on the face of a wave. Therefore you want to get something smaller than your standard sup.

And finally, in general, you want a rigid SUP to surf on waves.

Inflatables don’t give you the performance that you need on a wave. Especially cutting back and forth on the wave the turns, are just not ideal on an inflatable. And the sidewalls of inflatables are anywhere from 4 to 6 in which makes quick turns very hard to do on a wave.

A good board makes all the difference when riding waves on a SUP.  The folks over at Boardworks tend to make some really good paddleboards that are quite surfy.  Not a surprise because they also make surf boards. The Kraken also has a 5-fin setup that is configurable for whatever water conditions you’re paddling in.  This is just a really solid, great looking board for surf as well as flat water paddling.

Where should you go to learn how to SUP surf?

The best place to go is where no one else is. You want to look for an uncrowded area with lots of room to operate in. Generally, you would want smaller gentle waves especially if you can find them where the water surface is smooth and not choppy.

Something you don’t want when you’re learning to surf are rocky areas like jetties or wharves or any sharp reefs. Ideally, you want a beach break with sandy bottoms and wide-open expanses.

It will take some practice and experience to be able to stand up while paddling out through the breaking surf. You can do it in time. and, even as a beginner, it’s worth trying to stand up and paddle through the break because you will understand the challenge and how to balance properly.

Even though you will fall a bunch it will be worth it for the experience that you gain.

And don’t forget as you’re paddling through the break to keep your paddle in the water. It’s like standing on three legs as opposed to two.

It gives you so much more balance and stability if you keep your paddle in the water during the break. A common mistake to make is to get nervous or scared and hold on to the paddle with both hands while the paddle is out of the water. You’ll have less stability if you do this and most likely fall into the water.

Because you can always fall into the water, be sure you understand water safety recommendations for SUP.

Most people don’t  wear a life jacket while surfing on a paddleboard.  The Coast Guard does not require you to wear a personal flotation device (PFD) while in the surf.

So you don’t have to wear a life jacket in surf conditions.

And if you’re learning, you should be in relatively small waves and therefor well within your ability to stay safe and swim to shore.

But if you want some extra protection, you might want to pick up a compact life jacket like this one, the NRS Vapor PFD.  A PFD like this one is good because it is so small, and doesn’t restrict your movement while on your board. Another good way to have a little extra buoyancy while in the surf is with a wetsuit.  A wetsuit won’t give you as much flotation as a lifejacket, and shouldn’t be used in place of one, but it will help a little.

A wetsuit can also make your time on your paddleboard more comfortable.  A lot of beaches with good surf, have cold water.  For example, California has tons of great breaks to surf on your SUP, but the water is cold and you’ll want a wetsuit.

A pretty solid choice for a wetsuit, for folks that are new to SUP surfing, is the O’Neill Reactor II 3/2mm Back Zip Full Wetsuit. This wetsuit is a popular option, not only for surfers in California, but all up and down the West Coast.

Like anything, you’re not going to pick this up immediately. It’s going to take some work, but as stated earlier you can get the basics of it down nearly instantly. You can SUP surf right away without ever having surfed before. That’s what makes surfing on a SUP so appealing.

But that’s all part of learning.

And that’s about it.

SUP surfing is the most fun that you can have on a stand-up paddleboard. Wait for the weather to bring you some waves grab your board and hit the beach and start practicing your SUP surfing.